Is making your brand stand out important?

But recently a friend of mine (a former colleague), who now works at another agency advised me they had a pitch for an organisation that was looking for cut through and stand out in a highly competitive market. These happen all the time, so why did they mention it? They told me as they entered the very impressive building they noticed a quote from a legend of the modern age who was the co-founder of this organisation. It struck them that this was awesome and they never would have dreamed that this legend would have even known the organisation let alone been a co-founder.

However re-reading the reference closely it was just a sound bite from this legend who was the co-founder of one of the biggest companies ever and not the organisation we were seeing, and probably didn’t know they existed. They felt disappointed and the more they thought about it cheated, and weeks later it has stayed with them hence they mentioned it to me.

But how does this story relate to making your brand stand out?

The organisation told (my friend) that this was the first time they had requested outside agencies to pitch as they needed help to improve their brand to get the cut through that they (said they) desperately needed.

The right agency can be amongst the best decisions any brand can ever make, but you have to be in the right space to work with an agency.

Perhaps they should have used our very useful IMHO “Decision helper flowcharter” to make sure their valuable time and the agencies was not wasted. 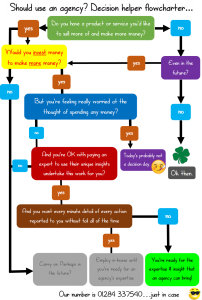